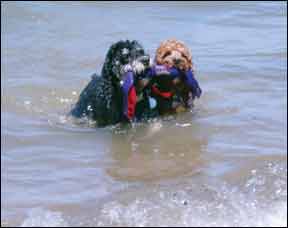 Bill and Marin Corby of Romeo, Michigan, feed a homemade diet to their two rescued Cockapoos. Max, estimated to be anywhere from 6 to 9 years old, has been with them for three and a half years. Max weighed 32 pounds when first adopted, but his current weight is a healthy 20 pounds.  Mickey was four months old and very sick when they first brought him home, as he had problems digesting his food. The Corbys switched Mickey to a raw diet, and he’s now thriving at 20 months of age and 16½ pounds.

The Corbys feed a raw diet with a lot of variety. They make the food in large batches, then freeze it in 7-cup containers that hold a few days’ food each and are thawed as needed. Amounts shown below are for the complete batch, which lasts 34 days. Most ingredients are pureed in a food processor, then mixed with meat, Sojo’s, and spices in a large, shallow Rubbermaid storage container.

Each dog gets 8.5 ounces of this recipe per day (the amounts shown in parentheses are the daily amounts per dog):

-1 Tablespoon each turmeric, garlic, and ginger

-Each dog also gets one raw, skinless duck neck daily (averaging 3 to 4 ounces each), and a squirt (about ½ teaspoon or 2 grams) of salmon oil.

First Look
I was pleased to see that this diet includes a wide variety of foods, with appropriate proportions of the various food groups: approximately 30 percent raw meaty bones, 33 percent meat (including 2 percent liver), 5 percent eggs and dairy, 20 percent vegetables, 10 percent fruit, and 2 percent supplements. It provides each dog with about 550 calories daily.

I winced, however, at the high-fat ground beef. Many homemade diets, particularly raw diets, are much higher in fat than most pets need. While dogs don’t suffer from clogged arteries the way people do, too much fat can lead to obesity, digestive upset, and even pancreatitis in susceptible dogs. It can also reduce the dog’s total nutritional intake because portions must be reduced to keep the dog from becoming obese.

I like to look at grams of fat per 1,000 calories (kcal), abbreviated GFK. A diet with 25 GFK, which is about 10.5 percent fat on a dry matter basis (DM), is considered low fat, suitable for dogs prone to pancreatitis or fat intolerance. A working sled dog might eat as much as 81 GFK (about 50 percent fat DM). Most pet dogs do well with 30 to 50 grams of fat per 1,000 calories (around 13 to 25 percent fat DM), depending on their activity level, how easily they gain weight, and whether they have any problems tolerating fat.

The only food group missing is fish. Fish supplies vitamin D, which must otherwise be supplemented using cod liver oil or a multivitamin. The National Research Council (NRC) recommends about 100 IUs vitamin D daily for dogs weighing 20 pounds. The recommended amount of vitamin D for humans has been increasing in recent years; the same will likely happen for dogs in the future as well.

Tinkering With the Diet
Adding 4 pounds (drained) of canned pink salmon or jack mackerel (about 1 ounce per dog daily) to the recipe would provide enough vitamin D and omega-3 fatty acids so that no supplementation is needed. These fish are also relatively low in fat, so 85 percent lean ground beef could be used with the recipe. Sardines are higher in fat than salmon or mackerel, so if sardines were used, I’d suggest combining them with 90 percent lean ground beef. I also recommend rinsing the canned fish if the amount of salt is a concern, and using sardines packed in water, not oil.

Using leaner beef reduces the calories in the recipe. To keep the daily calories the same, the Corbys need to increase the amount they feed by about 30 percent, to 11 ounces per dog daily. Caloric needs are always an estimate, so it’s important to keep an eye on the dogs’ weights and adjust the amount fed as needed to keep them slim and trim.

I don’t advise feeding whole eggs with shells. If the shells are needed to supply calcium, they should be ground to a powder in a clean coffee grinder to ensure that the calcium can be absorbed. One large eggshell makes 1 teaspoon of eggshell powder, which provides about 2,000 mg calcium. If the shells are not needed to supply calcium, it’s best to leave them out in order to avoid giving the dog too much calcium. Adult dogs have the ability to regulate their uptake of calcium, so excess amounts won’t cause the kind of orthopedic problems one might see in large-breed puppies, but calcium binds other minerals, so too much can reduce the nutritional quality of the diet.

There is no need to add calcium to this diet, since the duck necks supply more than enough. Without the raw meaty bones, they would need to give each dog 500 mg calcium daily.

The amount of Sojo’s mix in this diet is not significant; it would be fine to use oatmeal or other grains instead.

Poultry is high in linoleic acid, an omega-6 essential fatty acid, so there is no need to add plant oils to this diet. The amount of salmon oil that the Corbys feed is about twice what their dogs need. When fish is added to the diet as described above, there is no need for added salmon oil at all. This would improve the ratio of omega-6 to omega-3 fatty acids in the overall diet and lower the GFK.

All the homemade diets I’ve analyzed have been low on vitamin E, and added oils increase vitamin E requirements, so this vitamin should always be supplemented. Recent human research, however, has shown that high doses of vitamin E may be counter-productive, negating its antioxidant benefits. I recommend giving 10 to 20 IUs daily to dogs weighing 20 pounds. This is most easily done using a canine multivitamin.

Despite the excellent variety and proportions in this diet, an analysis indicates it’s slightly low in a few minerals (zinc, copper, and selenium) when compared to NRC recommendations. I’m never sure how significant this is, since the NRC bases their guidelines on commercial diets that are high in grains, and grains contain phytates that bind certain minerals. The amounts recommended by NRC may therefore be higher than are needed when feeding a homemade diet that is relatively low in carbohydrates. To be safe, though, it would be easy to give a canine multivitamin and mineral tablet to each dog daily. Most will meet requirements for vitamin E and the minerals listed above.

-Add four pounds of canned fish (drained and rinsed) to the recipe and eliminate the added fish oil.

-Increase total amount of recipe fed to 11 ounces per dog daily (new recipe should last 30 days). Adjust as needed to keep the dogs at their proper weights.

-Add vitamin E or a multivitamin and mineral supplement.

-Revised diet has 47 GFK (about 23 percent fat on a dry matter basis).