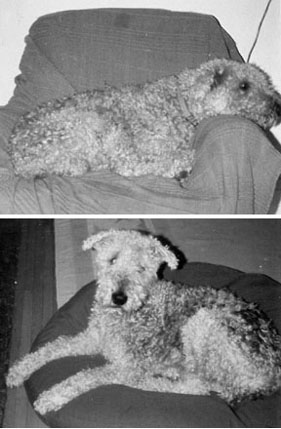 Bailey, my Airedale, will be 15 years old this year. He doesn’t look or even act that old; he has just the slightest trace of arthritis, but his skin and coat are healthy and lustrous. You would never know that he experienced terrible skin problems for the first nine years of his life.

Starting when he was not quite a year old, Bailey’s back would break out in sores, and he would chew the sores until they were raw. The veterinarian I took my dogs to at the time thought it was due to fleas; she recommended giving Bailey a flea bath. Within 24 hours of his first flea bath, Bailey’s entire body had broken out in sores, and it took months for them to heal.

This experience was just a hint of things to come. For nine years, I treated Bailey with conventional medicine. I tried every kind of “premium” commercial dog food there was and used at least 15 different brands of shampoo, each of them designed to relieve itching. Bailey had allergy shots bi-weekly, and was on oral Prednisone daily. Sometimes Bailey looked and felt better, showing small signs of improvement, but then suddenly he would get worse again, with no trigger that was apparent to either my husband or me. We’d try a new shampoo or food, and when it helped we’d think, “Okay, we’ve got it this time!” But inevitably, Bailey would begin itching and scratching again.

As frustrating as this experience was, I was under the impression that these were fairly typical dog-owning occurrences. However, my entire viewpoint on the conventional treatment of Bailey’s allergies changed dramatically the day Bailey started having internal bleeding – an allergic reaction to antibiotics that the specialist in veterinary dermatology had prescribed for an apparent bacterial skin infection. You can imagine my horror; Bailey bled from his eyes, nose, and from the sores on his back. When the veterinarian gave Bailey a vitamin K injection to stop the bleeding, Bailey even bled from the injection site for six hours. It took several days for Bailey to improve, and I was very scared we were going to lose him.

I didn’t allow myself to feel aggravated about the course of treatment until it was clear that Bailey was out of the woods. Then I began to obsess on how ridiculous the whole situation was, for the “medicine” that was supposed to help Bailey nearly killed him! I decided at that point to look into alternative ways to help Bailey.

Researching alternatives
I first started reading books and articles about how detrimental commercial foods for dogs can be, due to the pesticides and toxins that can be in the food. I also read that most of the nutrients are cooked out of the foods; dog food makers must add vitamins and minerals to the food so that it will sustain dogs at all! It started to occur to me that Bailey’s problems could be a result of poor nutrition, so I looked for a book that dealt with canine nutrition. I found Dr. Richard Pitcairn’s book, Natural Health for Dogs & Cats, which included lots of information about homemade diets for dogs and introduced me to the concept of holistic veterinary care.

What I read intrigued me so much that I decided to consult a holistic veterinarian about Bailey’s allergies. By contacting the American Holistic Veterinary Medical Association (AHVMA), I was able to obtain a list of holistic vets in my state and found one right in my home town of Minneapolis. I immediately called and scheduled an appointment.

The first thing that the vet told me to do was to change Bailey’s diet to a raw, natural diet. The goal, he said, was to get close to the diet that a wolf might eat. He recommended using Sojourner Farm’s food as a base and adding raw organic meat and raw green vegetables, especially broccoli, parsley, zucchini, and cooked yams (which are a natural sources of cortisone). Sojourner Farm’s food is a mix of oatmeal, rye, cornmeal, wheat germ, ground pecans, dried kelp, and herbs; you add warm water to the mix, let it soak, and then add meat and vegetables. In addition to this food, the veterinarian recommended adding supplements of vitamins C and E and tons of garlic. These supplements act as powerful antioxidants and help detoxify the body, necessary for any animal living in our stressful and polluted environment.

Second, the veterinarian recommended I take Bailey off of the Prednisone he had taken for nine years. The Prednisone, he said, was only suppressing Bailey’s immune system and not allowing his body to deal with the allergies. We needed to build up Bailey’s immune system, not suppress it, he said. In his opinion, the allergy shots were just a waste of time and money, and he recommended that I stop those, too.

He also suggested that Bailey lose some weight – he estimated that Bailey was about 10 pounds overweight. Obese dogs often display certain concomitant health problems, such as skin problems, behavioral problems, and arthritis; it puts undue strain on the body to have to digest extra food when the dog is fed too much, he said.

The last thing the veterinarian said to me was that it often takes an animal two months to detoxify for every year he or she was given steroids. I immediately calculated in my head – two months times nine years would mean 18 months before I could expect Bailey to be free of the effects of Prednisone in his body? This was a profound – and prophetic – statement.

Life-altering plan
This veterinarian’s plan made sense to my husband and me, and we decided to pursue it with enthusiasm. We started the natural diet, slowly stopped the Prednisone and allergy shots, and eventually got Bailey’s weight down to optimum. Slowly, I began to see small improvements in his condition. He didn’t have as many sores, he wasn’t as itchy all the time, and he needed fewer baths.

Baths! That was something else. The veterinarian had recommended a shampoo called “Lightning Organic Dog Shampoo,” which has a citronella base. It really cleanses the animal’s skin, not just the coat, getting all the debris off the skin so new sores wouldn’t erupt and bacterial infections couldn’t start. It cleanses so thoroughly that you actually have to put a small amount of baby oil in the rinse water to replenish the oils in the skin.

Bailey’s new health plan was not an overnight success; it did take the full 18 months that the veterinarian had predicted it would to thoroughly detoxify Bailey after his many years of Prednisone. But we were encouraged by the steady improvements we saw in Bailey’s skin, coat, and even his temperament. Bailey had always been an obedient, well-mannered dog, but for the first nine years of his life, while he was afflicted with allergies and the conventional allergy treatments, he was also a slightly tense, anxious dog. He was aggressive toward other dogs, and seemed very independent and standoffish to us.

After just a few months on his new diet, my husband and I noticed that Bailey was “loosening up,” gradually becoming more demonstrably loving and affectionate. He’s much more accepting of his environment and any animals who want to greet him. Whether his former edgy personality was due to the constant irritation he experienced from allergies, or effects of all the medication he was on, I’ll never know, but his inner anxiety has definitely dissipated.

Starting out right
To further emphasize how vitally important a nutritious, natural diet is for a dog, about two years ago I adopted a one-year-old Wire Haired Fox Terrier from a rescue group. When I got him, Christopher’s coat was dry and frizzy, and although you could sort of see color tones of tan, black, and white (these dogs are usually tri-colored), he basically looked like a muted gray; none of the colors was very distinct. Since I already had Bailey on a natural diet, I fed Christopher the same food and supplements. Within 10 days – I couldn’t believe it was only 10 days – his coat started changing, almost in front of my eyes! Every day, the tan on his head would turn a more copper, tan color, the black turned a richer, darker black, and the white on his body turned brilliant white! Within two to three weeks, he looked like a completely different dog. The texture of his coat also went from dry and frizzy to soft, silky, and curly. It was truly a sight to see.

Feeding a dog fresh foods definitely costs a little more, especially when you have a multi-dog household like ours. But what we have saved in veterinary bills has more than made up for the money we spend on fresh meat and vegetables – and the dogs are really, truly happy and healthy.

Veronica Thouin is a WDJ reader from St. Paul, Minnesota.

All About Dog Allergies